Snake plant as known as sansevieria is ornamental plants or many peoples commonly called Mother in law tounge are one of the native ornamental plants from the tropics. Due to of its sharp shape is the reason this plant has the name of Mother in law tounge. Sansevieria is very easy to cultivate. This plant included to a succulent plant from the Dracaenaceae family originating from South Africa, Arabia, India and Indonesia. It is quite popular as a display indoor because it can grow in conditions that don’t need too much water and sunlight.

But if you decide to put them indoors, you should choose a location that is exposed to sunlight, for example that near to window sill. So that the plant can maximize its growth and not wither quickly.

You can sunbath the snake plant at least once a week, because of sunshine will make Mother in law tounge ornamental plant prevent the color of the leaves from fading. 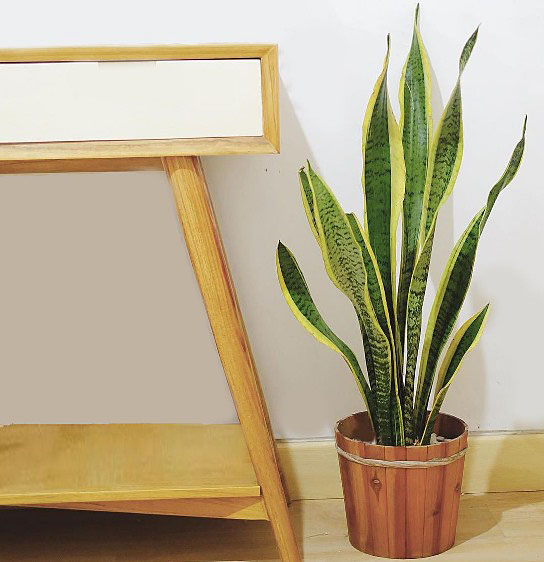 Mother in law tounge has many unique names. It is also known as the snake plant, devil’s tongue, bowstring hemp to the lucky plant or sansevieria. Snake plant have long blade shaped leaves. Usually the green on it is variegated. Apart from functioning as an ornamental plant, Mother in law tounge has properties that are very beneficial for us, namely that it can absorb various kinds of air pollution.

Well, just imagine, what if there are plants that can provide beauty and at the same time prevent us from various substances that can have a negative impact on the body? Which we don’t even notice. One of the ornamental plants that is capable of doing such a miracle is the snake plant, interesting right?The function of plants that can be placed in the room of the house, office and so on. And in fact, it is only useful for adding aesthetics. The benefits of Mother in law tounge are not only that. Summarized from several sources, there are some extraordinary benefits of snake plant:

Mother in law tounge has the ability to purify the air better than most other indoor plants such as Devil’s Ivy for Toxic Air Purifying, making it an excellent choice for ornamental plant lovers as well as health conscious people. Mother in law tounge is able to absorb excessive amounts of carbon monoxide and remove oxygen and filter other toxins from the air such as benzene, xylene, trichloroethylene, and formaldehyde.

A theoretical report that published at Harvard University shows that Mother in law tounge is one of the most oxygenated ornamental plants, so its health benefits for humans are undeniable. Mother in law tounge efficiently absorbs toxins and releases oxygen to the environment. Plants can effectively release moisture in the air and reduce the risk of airborne allergies.

As explained earlier, Mother in law tounge has ability to absorb and rid the environment of toxic air pollutants and cancer-causing agents such as benzene, formaldehyde, xylene, and toluene makes it an effective choice for treating and preventing this deadly disease.

Mother in law tounge is also able to reduce carbon dioxide (CO2) even at night. This is caused by Crassulacean Acid Metabolism (CAM). CAM has the ability to carry out certain types of photosynthesis which is normally carried out by drought tolerant plants, dry climates and succulent plants. They open the stomata at night to minimize water loss in hot climatic conditions.

Mother in law tounge or snake plant is also actively involved in helping the absorption of radiation, one of which is radiation generated by electronic goods. Therefore, it is very fitting to place this plant in the area of ​​the guest table or family room which is often used for gatherings.

Mother in law tounge flower has a distinctive odor and the ability to absorb anything that is not good for humans. In some developed countries such as China and France, Mother in law tounge is used as perfume. Therefore, it is very suitable to put Mother in law tounge in the bathroom or kitchen which is often used and in various other places that leave a strong odor. You know, this snake plant considered a lucky plant if it is placed indoors, as long as we take good care of it. Being able to store water in the leaves, they can last a long time without water. Although rare, Mother in law tounge can have small yellow flowers that give it a sweet aroma. The last benefit of the Sansevieria ornamental plant is that it is used as a sweetener in the yard of the house or indoor. Because of the shape, green leaves with grey or silver horizontal streaks is adding to the contrast and natural impression at home decoration. And the beauty of Sanseviera is also believed to help reduce stress.

Read also : How to Put Devil’s Ivy Plant in the Aquarium Having a Snake Plant in your home should be at the top of your list! They are great for beginners because they adapt well to any lighting situation and don’t require frequent waterings about every 2 to 3 weeks. Their structural vibe will take your decor up like 50 levels, and they are perfect to give as a gift.