Chrysanthemums originally come in an array of colours including yellow, pink and red. Today, there’s a kind of Chrysanthemum that comes in blue. Is it real? Sure, many people are wondering that blue Chrysanthemums is native, or such a manipulation,

Chrysanthemums which come in blue are not the original gene from Chrysanthemums. Of course, you may find this kind of flower rarely in nature. Blue Chrysanthemums occur only in select species like delphiniums and morning glories. 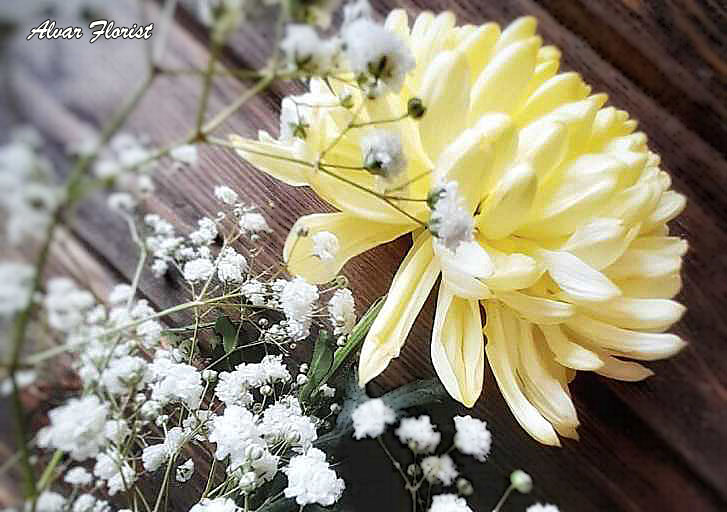 According to the Science Advances journal, the National Agriculture and Food Research Organization researchers inserted a gene from the bluish Canterbury bell into red mums to produce the Chrysanthemums in blue color.

In this case, the existence of this gene modified anthocyanin in the mums that produce purplish flowers. The researchers then added a second gene from the butterfly pea into the mix to result in a truer blue. They successfully did the trick where their experiment produces blue-violet mums.

Not without reason, the researchers made Blue Chrysanthemum to produce other colors that are more elegant, not only the original color. It is also related to the market demand to fulfill the desire of people who have a high taste for new colors.

Well, this blue color is one of the colors that dominates the market, making it profitable for the industry. In other words, the blue color has been a much sought-after color. So, it does not wonder if Blue Chrysanthemums was finally produced by researchers.

Unfortunately, you do not expect too much that Blue Chrysanthemums will be found in your near garden. That’s because the researchers have to produce a version that cannot reproduce and spread in the environment, before the Blue Chrysanthemums can be commercialized. Why?

As we know, Blue Chrysanthemums is a genetically modified organism. In this case, the blue version of Chrysanthemums will also be banned in parts of Europe and also other places with restrictions on GMOs.

In this case, the researchers will need a better understanding of the mechanism to control the blue flowers which really makes them popular. Although it technically falls on the blue scale, there have been a number of critics suggesting that new chrysanthemums are on the lavender and purple end of the blue spectrum.

Producing a flower for new colors and varieties of plants has proved quite difficult. Many researchers have been trying to do this for a long time, but it never worked perfectly. Due to market demand, the gardeners and florists always look for new colors of plants.

However, this is a bit difficult, because producing flowers that are not the original (in other words manipulation) does not simply include the two genes that are thought to produce the blue color.

To create the true blue flower really requires complex chemistry. In this case, Anthocyanins will be needed in producing the Blue Chrysanthemums. Anthocyanins means the pigment molecules in the petals, fruit and stem that consists of rings, causing a flower to turn blue, purple or red. It also depends on what sugars or other groups of atoms are attached.

Aside from that, the conditions inside the plant cell is also very important. Sure, only transplanting an anthocyanin from a blue flower such as delphinium would not really work.

Fortunately, a Japanese plant biologist named Naonobu Noda from the National Agriculture and Food Research Organization handled this matter by first placing a gene from a bluish flower called the Canterbury bell into a Chrysanthemums.

To make the bloom appear purple instead of reddish, the gene’s protein would modify the Chrysanthemums’s anthocyanins. Noda and his team then added a second gene that comes from the blue-flowering butterfly pea in order to make it get closer to blue.

Then the protein of this gene adds a sugar molecule to the anthocyanin. In this case, the researcher thought that they had to add a third gene. However, the Chrysanthemums were blue with just the two genes.

A horticultural scientist from the University of Minnesota in St. Paul named Neil Anderson said that the method that they took would allow them to obtain the truer blue they could get. Chemical analysis also showed that chrysanthemum has a colorless component that can interact with modified anthocyanins to create a blue color where the blue color will appear in just two steps.

Noda and his team then created blue Chrysanthemums which cannot produce and spread into the environment that make it possible to commercialize the transgenic flower. However, the approach would spell some problems in some parts of the world.

Mums is a member of the Asteraceae family that is related to sunflowers, dahlias, zinnia and marigolds. This kind of flower is also associated with autumn that appears in jewel colors in garden centers in September and October.

Chrysanthemums commonly grow to a width and height of 1 to 3 feet. Make sure to remember the amount when you have a plan to grow this flower in your garden. Before your last spring frost date, you can begin growing Chrysanthemums indoors from seed 6 to 8 weeks.

If you want to get the best result, you need to choose a spot in full sun away from big shrubs and trees. In the case of growing Chrysanthemums, you will need moist and well-drained soils.