You may wonder whether the snake plant is edible or not, considering there’s a fact that snake plant has plenty of benefits for humans such as natural air purifier, toxins removal, chemical absorbent, and also sick building healer. Then, is your snake plant grown at your home edible?

In fact, the snake plant or Sansevieria or also Mother-in-Laws’ tongue is not edible, instead the strong plant fibres are often used to create bowstrings and ropes as well as as decoration for their attractive foliage. There are a bunch of researches which reported that the snake plant’s fibres are used for various medicinal uses. 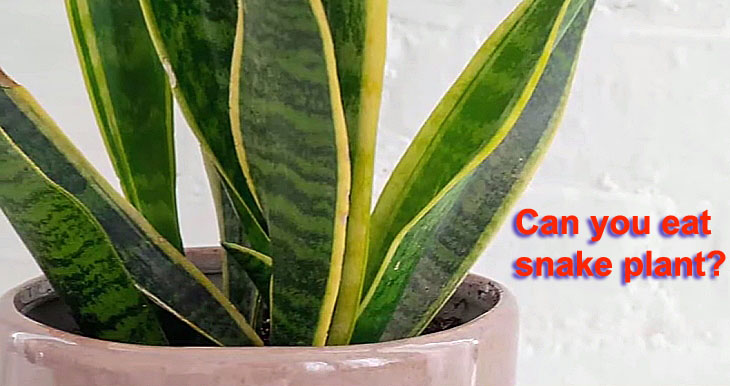 What Are the Benefits of the Snake Plant?

Aside from that, the snake plant also have  plenty of benefits that you can get when growing them indoors, here are they:

If you place the snake plant in the bedroom, it totally can produce oxygen at night that helps you to sleep better. Your snake plant can convert a lot of CO2 to O2 at night, so making it ideal to have some in your bedroom.

In fact, most plants will uptake CO2 and then release the O2 during the day and then uptake oxygen and release CO2 during the night. Well, the snake plant is different as this plant will produce O2 at night.

Additionally, about 6-8 snake plants will be needed per person to survive if there’s no air flow. It means that you can live in a completely air sealed room when you place this plant.

Your snake plant is also trusted as a natural air purifier, making it an ideal plant for indoor spaces. According to NASA, the snake plant will be able to remove toxins, meaning that workspaces and industries will greatly benefit such as aircraft plants, plywood, paint markers, carpeting, automotive plants and shops, sellers and offices.

The snake plant that you place indoors will be able to remove harmful chemicals from the air such as formaldehyde, benzene, toluene, trichloroethylene, and xylene. Additionally, formaldehyde is a chemical which is commonly found in hairspray causing respiratory problems.

Aside from that, another capability of the snake plant is to remove and absorb toxins where this plant will act as an effective defense against airborne allergies. So, placing the snake plant in your bedroom is such a must choice for you.

People with allergies should find a healer to remove any allergy sources to stay healthy. In this case, sick building syndrome totally explains the way the health of certain individuals of a certain residence or building that acquire moderate to acute symptoms is linked to the building, however, there’s no specific illness identified.

Well, the snake plant here acts as a poison absorber and oxygen releaser which can help to get rid of chemicals which are commonly used to create the buildings and residence. Even farther, your snake plant will release moisture in the air and reduce airborne allergens. So, the snake plant meets those conditions perfectly.

What Is the Poorness of Snake Plants?

That’s because the snake plant is known as a ‘bad luck’ plant. What does it mean? However, this argument is still one of the most important disadvantages of snake plants why most people don’t want to place it around their home. Well, the ‘bad luck’ of snake plant here is sometimes said in Feng Shui where this plant will deliver discordant and negative energy in the house.

The snake plant is also trusted to not require a crowded place as once the plant is crowded. It’s said to release negative energy which brings about misfortunes in the lives of people around. Therefore, it’s highly recommended to place the snaken  plant in low traffic so that this plant can be releasing positive energy instead of the negative energy.

In fact, the kinds of plants which are generally categorized as ‘bad luck’ plants will have designs delivering undesired energy. In some cases, many people trust that the ‘bad luck’ here is negative energy and poverty. That’s the main reason why some people tend to avoid having and placing the snake plant in their home.

In fact, pests are the main problem which snake plants encounter. Even though this plant is easy to grow, pests problem, overwatering and exposure to cold are the key culprits. These strong plants really have a ew insect issues which can become infested with spider mites and mealybugs.

When these pests suck the sap from the leaves, they cause small wounds and leaf fall. You can also apply mealybugs with alcohol as a control method. Spider mites can be eliminated by washing the leaves and increasing the humidity around the plant.

The snake plant is truly the easiest plant to care for, making it the perfect choice for a beginner or as a first house plant.

Regardless of its poorness, the snake plants are a worthy plant for you even if you want a houseplant which is tough indoors and also can be placed anywhere at your home. The snake plant also does not eat too much space where it’s good for a starter plant for the house. This plant also passes time between watering and can also start outside in spring and move inside.

Okay, those are some facts that you should know about the snake plant, its benefits and its disadvantages.