Chrysanthemum is a type of flowering plant from the Asteraceae tribe commonly called cut flowers or golden flowers. Chrysos in Greek means gold, while anthemon means flower. Chrysanthemum is often grown as a garden ornamental plant or as a pick flower.

This flower is the national flower of Japan which is known as キク(kiku). Because of its fragrant aroma, this flower is often added to tea to make it more delicious. The display of exotic sparkling flower colors makes this flower often used as a special flower to complement a gift or on certain formal occasions. 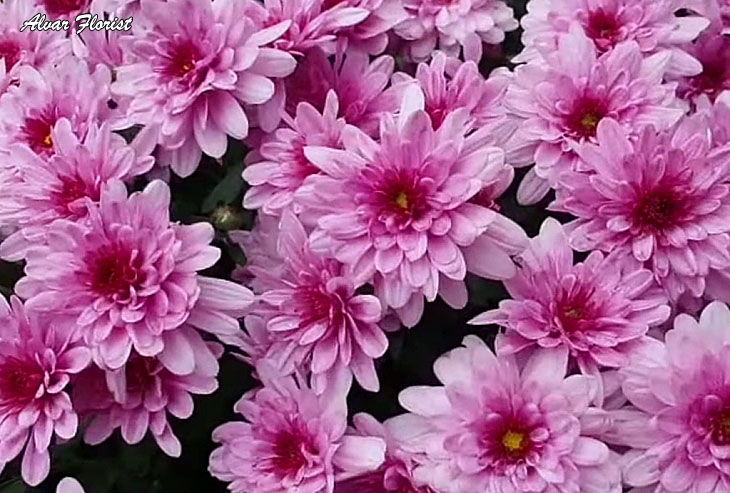 Because of its beautiful appearance, Chrysanthemum is identified with romance or the flower of love. A man who wants to get his girlfriend engaged, is often presented with Chrysanthemum flowers.

Curious to know more about Chrysanthemum flowers. Here’s a complete explanation of the history, types, benefits and philosophy of this flower!

The History of Chrysanthemum

Almost all natural species (Chrysanthemum spp.) originate from the plains of East Asia, especially in Japan. However, the historiography of cultivation was first carried out in China since 3,000 years BC. Karl Linnaeus, Swedish botanist who introduced Chrysanthemum to the West around 1753. This plant was brought to England in the middle of the 18th century by Robert Fortune.

Since then, Chrysanthemum has spread to European countries such as the Netherlands and others. In this century also, Chrysanthemum was developed in the United States by Elmer D Smith for commercial purposes.

No wonder that from the beginning, Chrysanthemum in America was used as a fashion decoration for many women, a complement to home and hotel decorations and a symbol of the strength of a lover’s relationship.

There are many varieties of Chrysanthemum flowers that are cultivated by ornamental plant activists. All of them are developed generally for commercial purposes. Here are some types that are commonly found, some of which are the result of authentic crosses.

Named local chrysanthemum or classic chrysanthemum because it comes from its original place, namely Japan. Its physical characteristics include light color and relatively easy to grow and adapt in all climates.

This species has larger petals with white petals and a yellow core. To note, the life cycle of this local species is very long, including 7-12 months of planting. Chrysanthemum maximum is one example. Besides being light in color, another special feature is the wide petals.

Unlike the local Chrysanthemum, this hybrid or cross does not have a long life cycle. Interestingly, this type has different colorful variants from the original type. One example is Chrysanthemum indicum hybrid.

In addition, this flower can also grow in various soil conditions. The flowering period is also long. It would be very nice if we could plant Chrysanthemum flowers in our yard.

How to Grow Chrysanthemum Flowers

How to grow Chrysanthemum flowers is not too difficult. Instead of lingering, just follow the method below, come on.

What types are there? The following types of Chrysanthemum flowers are suitable for planting in pots:

How to plant Chrysanthemum flowers next, you must choose quality seeds. In one pot, place 5-6 seeds so that there are not too many in one pot. You can put one seed in the center of a pot that already contains soil, then place the other seeds around it. Because we have to get a lot of full sun for optimal growth, we must place the pot in the right place.

Flush the Chrysanthemum flowers with enough water, do not let it pool because the roots will rot. For watering, just watered once a day in the morning. Do not water the leaves, just flush the stems and roots.

You can water it with a watering pitcher or use another plant sprinkler.

The next way to plant Chrysanthemum flowers does not need frequent fertilizers. Especially if the soil used has been mixed with fertilizer.

Ideally after two months of planting, you can start adding fertilizer with a period of once a month. If you can use natural fertilizer, yes, you can, so that Chrysanthemum flowers and the planting media are not contaminated by chemicals

How to plant Chrysanthemum flowers in pots, make sure the flowers get enough sun exposure during the day.

In one day, this type of flower requires sunlight for approximately 6-8 hours.

If you are trying to grow Chrysanthemum flowers, don’t forget to cut the flowers regularly too. We can do this when the flowers have withered and dried. The goal is of course not to interfere with the circulation of water and nutrients that will be received by all parts of the plant.

The growth rate of Chrysanthemum depends on many variables. Different varieties have different growth rates and mature sizes. It may take several years dif you prefer tor grow this chrysanthemum from seed. Chrysanthemum grown from established garden center plants and divisions has a great start to the growing season.

There are many ways to prolong the flowering period of Chrysanthemum. Deadheading of flowers, fertilizing in spring and avoiding overcrowding will help Chrysanthemum flowers produce more flowers over a longer period of time.