What family is a snake plant? You may wonder about it because of the look and also the name of this plant. Also, this plant can grow indoors and outdoors so that you want to know more about this plant. So, here we will give you information about it.

Snake Plant in the family Asparagaceae

Dracaena trifasciata is the binomial name of a snake plant. The synonyms of the name are Sansevieria aureovariegata, Sansevieria jacquinii, Sansevieria laurentii, and Sansevieria trifasciata. This plant is commonly known as snake plant, mother-in-law’s tongue, Saint George’s sword and viper’s bowstring hemp. In the list below, you are able to see the scientific classification of this plant. 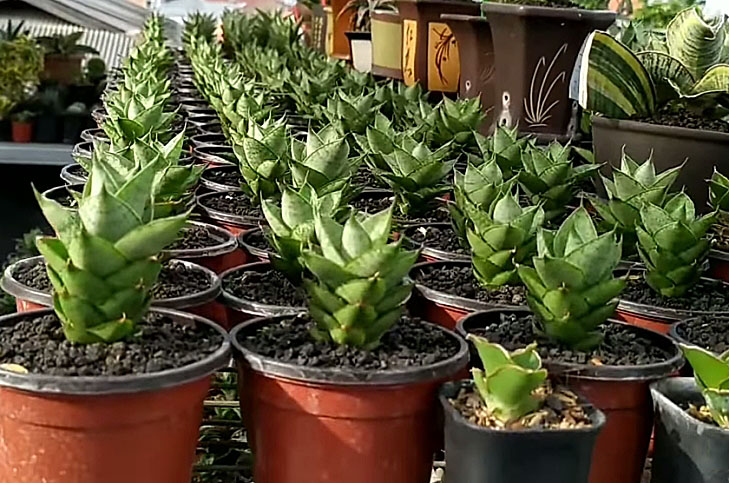 As you are able to see from the list above that snake plant is in the family Asparagaceae. You may wonder why this plant is called mother in law’s tongue, Saint George’s sword or snake plant. The reason is due to the shape and sharp margins which are owned by its leaves. Besides, this plant is known as viper’s bowstring hemp. Its due to one of the sources for plant fiber that used to make bowstrings.

According to Wiki 2, the snake plant is an evergreen perennial plant which forms dense stands and it spreads by way of its creeping rhizome, which is sometimes above ground and sometimes underground. The leaves of snake plants are stiff and they grow vertically from a basal rosette. The leaves which are mature have dark green color with light grey-green which cross and usually they range from 70 to 90 centimeters long and 5 to 6 centimeters wide. However, they are able to reach heights above 2 meters if they are in optimal conditions.

As mentioned above that snake plant is in the family Asparagaceae. It is a family of flowering plants which are put in order Asparagales of the monocots. Asparagus officinalis, garden asparagus is the best known member. Now, let’s find out about the taxonomy of it.

According to Wikipedia, in the previous classification system, the species which were involved were often treated as belonging to the family Liliaceae. The APG II system of 2003 permitted two options as to the circumscription of the family:

The revised APG III system of 2009 permits only the broader sense. there are seven subfamilies to correspond to the originally separate families that proposed and published at the same time by a paper. Those are listed below.

There are 114 genera in Asparagaceae with a total of ca 2900 species which are known.

Some Plants in the family Asparagaceae

Besides snake plants, there are the other plants which are categorized into the family Asparagaceae. Here are some of them according to luontoportti.com.

This plant is common in southern and central Finland. However, it becomes rarer towards the north. The pure white flowers of this plant and also enchanting fragrance have gained its popularity in summer wedding bouquets and flower vases.

This plant grows ferally in southern and western Europe. Also, it grows in southern Finland. Asparagus has been used for thousands of years and it has a reputation as a medical and useful plant. Even the rhizomes and roots of this plant are believed to enhance fertility, increase the production of milk in nursing mothers and relieve menstrual pains.

This plant grows in almost all of Finland including Lapland. This plant is sensitive to frost and fierce, direct sun. One of the most important pollinators for this plant seems to be flies. However, only around a quarter of the flowers which can produce berries.

The flowers of this plant in early spring at the same time as squills and croci. The inflorescence consists of small, spherical, pitcher-like flowers. They have sterile flowers on the end of their racemes and those only work to attract the attention of potential pollinators.

This plant is rarer and more demanding plant if we compare it to its more common relative angular Solomon’s seal (P. odoratum). Sometimes, the species are hard to differentiate because they look almost the same.

According to Succulent City, snake plants are native to tropical West Africa. And even these plants are an important part of African culture. Nigerians believe that it gives them spiritual protection. This plant is used by them in a ritual to remove the evil eye, a malevolent stare which gives a curse on its victims. This plant is also connected with some African gods such as the god of war.

Besides, the Chinese also think that snake plants can bring good luck the same as the jade plant. Based on their belief, the gods will bestow the eight virtues including long life and prosperity onto the people who take care of it.

Cultivation and Uses of Snake Plants

Same as other members of its genus, D. trifasciata can produce bowstring hemp. It is a strong plant fiber which was used to make bowstrings. Now, snake plant functions as an ornamental plant which can be put indoors as a houseplant in cooler climates or outdoors in warmer climates. Snake plant is popular as a houseplant because this plant is tolerant of irregular watering and low light levels.

The NASA Clean Air Study discovered that D. trifasciata has potential to filter indoor air where it can remove 4 of the 5 primary toxins which are involved in the effects of sick building syndrome. However, it is important for you to note that the rate of filtration is too slow for practical indoor use.