Do you know why people put snake plants in the bedroom? However, they really know that this plant will give some benefits for people around. The greatest benefit of snake plants is to be able to filter indoor air from toxic pollutants. So, that’s why a lot of people place the snake plant in their bedroom. 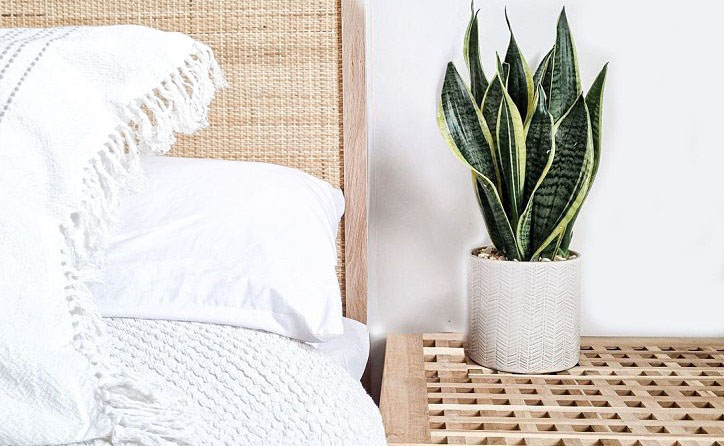 Known, the snake plant will emit oxygen at night which helps you to sleep better. This plant is able to convert a lot of CO2 (carbon dioxide) to O2 (oxygen) at night which makes it ideal to have some in your bedroom.

Moreover, roughly 6-8 snake plants will be needed per person to survive if there’s no air flow, meaning you live in a completely air sealed room if you have this plant. It can also remove formaldehyde from the air.

Most plants widely uptake Carbon dioxide (CO2) and then release the oxygen during the day and uptake oxygen and release CO2 during the night. However, the snake plants are different where they can emit the oxygen at night.

CO2 will be absorbed through the stomata and O2 will be released by the same stomate. In CAM photosynthesis, the plant will open the stomata at night to minimize water loss. Then, the CO2 is acquired at this time and stored in vacuoles as malate.

Your snake plant will also remove some harmful chemicals from the air including formaldehyde, benzene, toluene, trichloroethylene e, and xylene. To know that formaldehyde is a chemical which is commonly found in hairspray which will cause respiratory problems. That’s why placing a snake plant in the bedroom is a must for you.

Moreover, with the capability of the snake plant to absorb and remove harmful toxins, this plant can act as an effective defense against airborne allergies.

The snake plant is also believed as a natural air purifier which is an ideal plant for indoor spaces. NASA consistently showed that the snake plant to remove toxins which means that industries and workspaces such as aircraft plants, plywood, paint markers, carpeting, automotive plants and shops, sellers and offices will greatly benefit by keeping some around.

NASA also recommends at least 15 to 18 medium to large size plants for a 1,800 square-foot home to clean the air in space stations.

As we know that the snake plant is able to absorb toxins and release the oxygen. It means that this plant can release moisture in the air and decrease airborne allergens. Well, the snake plant meets those conditions perfectly.

Well, people with allergies have to find a friend in such a snake plant as they’re a natural and cheap way to stay healthy. Furthermore, teh workspace and public space should be aware of the value of air-purifying plants for those reasons.

Meanwhile, sick building syndrome really explains the way the health of certain individuals of a certain building or residence which acquire moderate to acute symptoms linked to the building while no specific illness can be identified.

Well, there will be a few things which make sense to explain this, such as ventilation which does not properly distribute air, upholstery, chemicals from carpets, cleaning agents, copy machines, and outside pollution being pumped in molds, bacteria and viruses.

Chinese commonly grow the snake plant in their houses as a precious plant since the Eight gods awarded their eight virtues as gifts to all people who owned this plant. Well, the eight virtues here include beauty, long life, prosperity, art, health, poetry, intelligence and strength.

They actually put the snake plants close to the entrance within their home for the purpose to allow the eight virtues to enter, according to Feng-Shui.

Even though snake plant is considered a bad Feng Shui plant, however, it’s not true as this plant really brings very helpful Feng-Shui energy when needed in specific areas of a home or office. The point is, the snake plant has strong protective energies for people around.

In other words, the snake plant is a gorgeous expression of upward, growing ch’i. The strong wood energy here really cuts through the negative or stagnant energy of this plant. Well, the best position to put the snake plant is in a place enriched by the plant’s Wood element.

How Worthy Is the Snake Plant?

You should know that the snake plant care is very straightforward. However, they can be neglected for weeks at a time yet. However, with their strappy leaves and architectural shape, this plant still looks fresh.

The snake plants or also known as ‘Sansevieria’ are the easiest of plants to look after. Moreover, they will happily reward your lack of attention to your home by giving the clean air to your room and a bit of cheer in the corner of any room.

Snake plants are reliable plants for you if you want a houseplant which is tough indoors and can be put anywhere at home. This plant also does not eat too much space which is a good starter plant for the house. The snake plant also goes time between watering and can start outside in spring and move inside.