The most common group of diseases that Calatheas Roseopicta suffer from is those that cause root rot. This will be devastating. Also, Calatheas can get leaf blight diseases, caused by fungal and bacterial pathogens. Usually, this results in multiple brown spots on the leaves which spread over time, and can quickly result in your Calathea Roseopicta dying.

Need to know that bacterial and fungal infections are the most common diseases to affect Calathea Roseopicta. Those are frequently the result of too much moisture. Overwatering and wet leaves open doors to disease. Usually, trouble shows up as spotting in the leaves. Small lesions can be handled by keeping water off the leaves and reducing moisture levels. 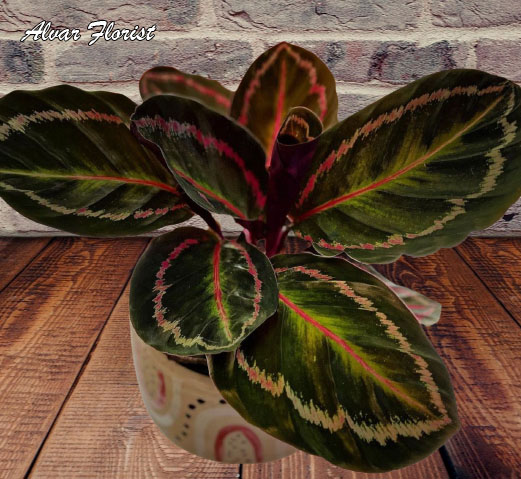 Calathea Roseopicta’s Leaves with large lesions must be safely trimmed and discarded. Dark green or black lesions will be able to signal infection. You are able to try treatment with copper bactericides or other proposed remedy, however it is usually safest to destroy the victim plants. Also, Calatheas Roseopicta will be able to contract the Cucumber mosaic virus (CMV), which causes yellow jagged streaks on leaves. Calatheas Roseopictas do not suffer greatly from this infection, but they are able to transmit it to more susceptible plants.

Fast action is required to deal with any Calathea diseases. Leaf blight must be treated by pruning off all affected foliage and isolating your plant from any other houseplants. Apparently, topical treatments for leaf spot diseases are rarely effective for Calathea Roseopicta. Success depends on how quickly the affected foliage is removed and also how severe the disease outbreak has been.

Some Diseases that Attack Calathea Roseopicta

Here are some diseases that attack Calathea Roseopicta:

It is a type of disease which is caused by the parasitic algae Cephaleuros virescens. It affects not only the leaves but also the twigs of your Calathea Roseopicta. The spots will look like patches which may be green-gray or greenish-brown in color.  The leaves of the calathea may turn yellow and drop in advance. It occurs when the leaves get heavily infected.

One reason for the brown spots present in Calathea Roseopicta is a fungal disease. Here are the common fungal diseases which can infect your calathea plants:

This disease is caused by the fungus recognized as Alternaria alternata. Infected Calathea Roseopictas will show small spots that are water-soaked in appearance.

Caused by Drechslera setariae, this type of disease causes the leaves to develop water-soaked lesions. Initially, the spots are yellow but later turn brown. Through time, the small spots join together and make bigger marks on the leaves.

Calathea Roseopicta infected with fusarium wilt will indicate wilting and yellowing of the lower leaves. It is because the base of the plant where it was cut dies and rot.  The pathogen behind this disease is Fusarium oxysporum.

If you notice that the Calathea Roseopicta leaf tips are yellowing and then turning brown, it probably is a disease recognized as anthracnose. The browning in the Calathea Roseopicta leaf tips extends on the entire leaf until it totally dies. For your information, Colletrotrichum and Gloeosporium are the fungi behind this disease. The wounded plants are more susceptible to anthracnose fungi. If you have used a previously infected tool, the opportunity to transfer the disease-causing agent is high.

One different thing you are going to observe with Calathea Roseopicta leaves infected with powdery mildew is the presence of a powdery white texture. Sometimes, the leaves will have a brown and papery texture. This disease is caused by Oidium pathogen. This pathogen will be able to transfer from the decaying materials present in the soil to the plants. Also, they are able to travel through the air.

Bacterial leaf spot on Calathea Roseopicta may be caused by P. cichorii or Pseudomonas sp. Those bacteria affect the leaves of certain species such as Calathea Roseopicta and Calathea Roseo-lineata. The lesions are water-soaked in appearance with tan to brown color and have a size of 1-inch in diameter. The symptoms of Pseudomonas are mostly seen in younger leaves. While the P. cichorii affects the older leaves of calathea. They are going to tend to enlarge when the wet condition persists.

Root rot is a typical issue with specimens sitting overly wet for an extended period. The symptoms are rapidly withering leaves, decaying brown base and reduced development. Too much moisture in the soil is the most common cause of the root rot. However, there are other factors that can generate it, including infections with fungus, drainage issues, and over-fertilization. Aside from that, Cercospora, Bipolaris, and Botrytis are several of the fungi which can cause root rot in your Calathea. The drainage hole at the bottom of the container is the most important feature required to grow this plant. In large pots, the soil occupies a big amount of space compared to the roots, so water can take a long time to evaporate, boosting the likelihood of rotting.