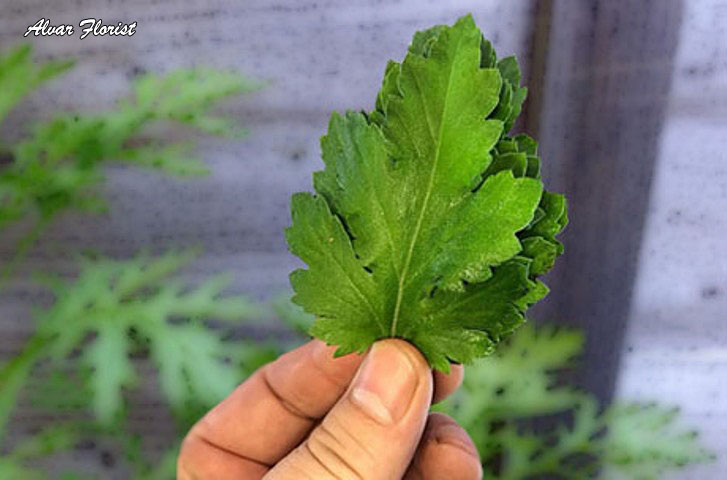 Characteristics of chrysanthemum flowers can actually be seen from the shape of the leaves. As can be seen in the picture, the leaves of the chrysanthemum flower have jagged edges and gaps with pinnate veins. These leaves are arranged alternately on the stem and branches. It grows with an oval shape, equipped with a rounded base and a tapered tip. The length of these leaves ranges from 7 to 13 cm with a width ranging from 3 to 6 cm.

There are two main varieties of chrysanthemum, small leaf and broad leaf. Both varieties have long green leaves attached to pale green to white, slightly fibrous stems. The chrysanthemum leaves are soft and slightly crunchy with a light, grassy and sweet taste. The taste of the herb is similar to that of mustard greens, and the leaves also have a bitter taste that becomes more pronounced the longer the leaves are left on the plant.

The solution is to move the plant to better soil by improving the soil by mixing it in sand or peat moss to make it better able to circulate air.

Pear-shaped sucking insects, aphids are no larger than a pin head, but aphids rarely travel alone. These insects often gather in large numbers at the tips of stems and shoots of plants.

Well, if you see a yellowing of chrysanthemums, check to see if these plant lice are present. Fortunately, you can eliminate the problem aphids cause with chrysanthemums by picking the full, yellow leaves on the chrysanthemums and throwing them in a plastic bag in the trash.

You can also spray the bugs with an insecticidal soap product according to the label directions.

Aphids attack can reduce the quality of chrysanthemum flowers. To control this pest, farmers usually use synthetic insecticides which are commonly sold in the market.

However, synthetic insecticides are often used unwisely, resulting in various negative impacts including the occurrence of pest resistance to insecticides, the emergence of pest resurgence (explosion) and the occurrence of secondary pest explosions, besides being able to cause environmental pollution and kill natural enemies, it can even cause poisoning in humans and animals.

One of the plants that has the potential to be developed as a vegetable insecticide in leaf pest control is the genus Toona (suren) which belongs to the Meliaceae family and has not been widely used.

Suren plant (Toona sureni) has the opportunity to be used as a vegetable insecticide because of its abundance.

Suren contains active ingredients that are insecticidal, the extract can control beetles on wheat.

There is currently no treatment that can cure infected plants if the leaves has been infected of Fusarium wilt in chrysanthemums .You just can protect healthy plants to some extent by spraying them with a fungicide, but plants that are already infected must be destroyed or discarded.

Similarly, there is no treatment for mottle chlorotic. What you can do is destroy infected plants with yellow leaves. You’ll also want to disinfest any gardening tools you use on plants and make sure not to touch healthy chrysanthemums after handling infected plants.

Often when we have plants at home, we think about whether they can be eaten. So, can chrysanthemum leaves be eaten too?

The answer is yes, and chrysanthemum leaves are best eaten raw and cooked like steaming, sautéing, and boiling. They can be used raw or slightly wilted in salad preparations instead of dandelion, endive, and kale vegetables.

For good taste, don’t overcook as the delicate leaves only need 30-60 seconds of heat and will turn bitter and mushy if overcooked.

Chrysanthemum leaves can also be lightly ground and fried into tempura. Their flavors go well with tahini, mirin, sesame, soy sauce, dashi, lemon, garlic, nuts, rice vinegar, and other leafy greens. Chrysanthemum leaves will last for several days if stored in a plastic bag in the sharper drawer of the refrigerator.