Snake plants are some of the strongest plants. The reason is because they are able to live indoors and outdoors. If you forget to water them for several days, they can survive and will still look good. Now, if we talk about snake plant, this plant has some methods to propagate. Can we propagate it from new shoot? If so, how to do that?

One of the methods to propagate or grow snake plants is by Rhizome. What is rhizome? It is a stem which grows underground and horizontally. In snake plants, new shoots will be produced and the shoots are called pups. What if we do not have pups to grow into new plants? If so, you are able to use the rhizome to grow new snake plants. 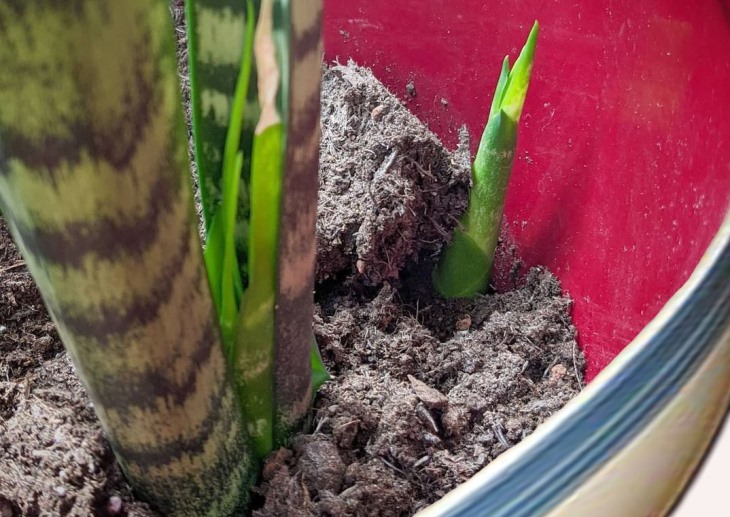 To propagate snake plants from rhizome, there are several things that you need including:

Now, the things that you have to do is to lay your snake plant carefully on its side. Then, you have to slide it out of the pot. In the root area, you have to find some rhizomes under the soil. What are the rhizomes like? They are a white stem which looks liked cloves of garlic.

If you have found the rhizomes, then you are able to cut them from the base of the plant by using a sharp knife. Make sure that the knife is clean. When you do it, you have to be careful not to damage the roots around it.

After that, you have to let the rhizome to callous over for several days same as when you do in soil cuttings. Then, if you find that a callous has formed, the rhizome can be planted in a new pot. Then, you have to watch and wait for the new growth to appear.

Propagating a snake plant is water is the easiest one. The thing that you have to do is to snip off the leaf that you want to propagate near the soil by using a sharp knife or scissors. It is better for you to dip your cutting into root hormone. Well it is ok if do not want to. Then, you have to put the bottom portion of the leaf in water where the covering is about 25% of the leaf with water. Take note that put the leaf of snake plant in the same orientation as it was when the leaf was in soil is a must. The leaves of snake plant are very polar so that the roots will only be grown if the edge of the leaf that was nearest to the soil is placed in the water. Then, you can put the container in an indirect light area and change the water every couple of days. Immediately, you will see small roots and then you can plant them in sand.

More info: How to Grow Snake Plant from Cutting in Water Properly

Now, how about propagating snake plant cuttings in soil? You can start with the leaf that you want to propagate. Cut it close to the soil by using knife. Then, cut the leaf into pieces and let them sit out for several days until they start to callous over to prevent bacteria from the soil from getting into the leaf and causing rot. You have to remember the part of the leaf goes up and which part goes down. Then, put the part which was close to the bottom of the plant in to soil which is well-draining.

To propagate snake plant by division, you have to separate a single plant to become two or more plants. Then, lay your plant on its side and then slide the plant out of its pot. Carefully, you must inspect the roots and find the rhizomes. After that, cut the plant so that there are at least 3 rhizomes and one good healthy leaf per section. Also, there must be a couple of roots in each section. After you split the snake plant, you can repot each separate plant into a fresh pot with succulent soil. Water each of them with a small drink of water and do it again when the soil dried out.

How to Grow Snake Plants Shoots

After you have done the propagating process above and then you find that there are snake plants new shoots, you have to repot it. You can get the snake plant out of its pot and then brush away some of the soil so that you can see where the new shoots or pups are connected to their mother. The soil level sits in the white part of the pup.

Now, the thing to do is to make a cut below a root so that the pup or shoot has some roots of its own to have a strong start out in the world. You have to pot the shoots or pups in fresh soil. You can pack the soil up to where the white section of the stem becomes green.

Things to Do to Take Care of Snake Plants