The snake plants are considered as toxic houseplants. They show low or no toxicity in humans, but they are toxic for pets like cats and dogs, according to the ASPCA or the American Society for the Prevention of Cruelty to Animals.

Apparently, there are saponins in the snake plants. For those who have no idea, the saponins refer to the natural insecticides and fungicides. When they are ingested, these substances are toxic for living beings and can cause gastronomical reactions, including vomiting or diarrhea in humans and animals. Not only that, the juices of the snake plant can cause dermatitis, a form of skin rash or irritation. 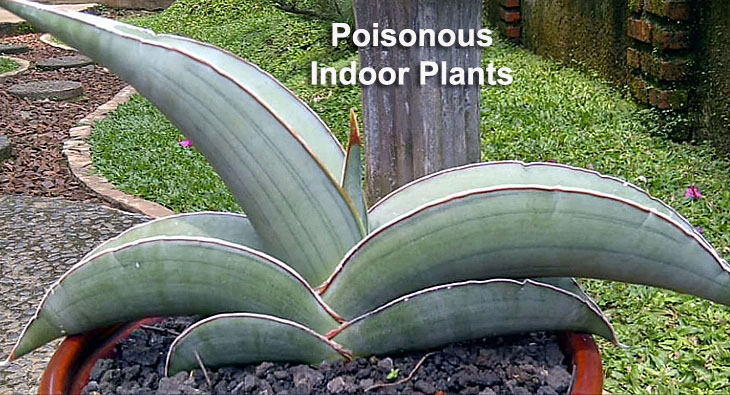 Any part of the snake plants is toxic. If any part is chewed or ingested by someone or a pet, the risk of developing a severe allergic reaction will be increased. It can lead to swelling of the tissues in the oral cavity and esophagus. In the worst cases, it can cause fatal things if your pet consumes too much of them.

Once again, keep in mind that the saponin toxins are everywhere in every part of the plant. That’s why you need to keep the snake plants away from your children and your pets because they are poisonous or toxic.

What are the symptoms of getting poisoned by the snake plants? When they are consumed, the one that eats it will feel bitter taste. After a while, the situation will get worse as there might be a burning sensation in the mouth. Even though the snake plants cannot be consumed and they are avoided by most animals, there is still a possibility of the animals like dogs and cats to try them as these animals are always curious about something.

After ingesting the plant material and its sap, the small children and animals will begin to show some common symptoms, such as swelling on the lips, tongue, and mouth; nausea, vomiting and diarrhea; abdominal pain, loss of appetite; and for pets, they might drool excessively as their salivation is increased. According to some sources, the foaming action of the position contained in the snake plants can affect the gastrointestinal tract that leads to rupture of blood cells and cell death.

The snake plants are poisonous when they are ingested and everyone will be fine if they just touch them. However, touching them is not 100% safe as the liquid from the leaves can cause the skin irritation. In order to avoid getting irritated, you are suggested to use gloves when you are repotting or handling them. Due to the fact that everyone loves to grow them inside, it is highly recommended to keep them out of the reach of the small children as well as the pets. If possible, please put them on a high self. If you or your children or your pet have irritation, you are recommended to see the doctor to ask for the thing that can relieve it.

In case something bad happens like your cat has consumed a bit of the snake plant, the first thing that you need to do immediately is to take out the pieces of the bitten leaves from its mouth. After that, bring your cat to a vet. If the case is related to the poison or if you are not sure about the symptoms, please reach out to the APCC or the Animal Poison Control Center. In case your child or your pet has ingested a large amount of snake plant, you might also need to flush the mouth, force them to vomit or pump their stomach so that they can make the part of the snake plant to be out of their body.

What about the sick building syndrome? If it is your first time hearing this term, this one refers to a medical condition where people who spend long periods of time inside buildings begin to feel sick for no particular reason. The signs of this syndrome include increasing in severity when they spend more time inside, and decreasing with more time spent outdoors. While it is true that this illness has not been yet to be proven true, a lot of people believe that it is true. As same as any other indoor plants, mostly this snake plant can help anyone to feel better if they put indoor such as in bedroom due to they are capable to eliminating toxins like xylene, nitrogen oxides, formaldehyde,and toluene. And usually there are air circulation in most homes and workplaces. You know this snake plant are so helpful for air conditioning systems are off at night. The snake plants are be able and effective to clean the circumstance. By existing of these plants can help to filter or absorb the dangerous things like when some other man made materials for homea by using glue, or some things indoors such as carpet, sealers etc.

In addition to these, these plants can help to the ear, nose, and throat irritation, coughing, itching, dizziness and nausea, lack of concentration, fatigue, chest tightness, and muscle aches. So, if you are having a hard time sleeping because you have a sore throat or your nose is running that makes you go away at night, it might be a good idea to consider putting a snake plant in your bedroom. The snake plants are unique as they usually release oxygen at night even with the process known as Crassulacean Acid Metabolism or CAM. During the night, the only thing that they do is to open their stomata. They do it to avoid dehydration. The carbon dioxide is absorbed and the oxygen is released. As you used to know that during photosynthesis they use the stored organic acids.