Chrysanthemum, also known as mums is a type of tropical flower plant from China. This flower is included in the Asteraceae family, which also consists of several other popular types of flowers such as Aster, Dahlia, Pot Marigold, Zinnia and Starflower.

In terms of shape, chrysanthemums can come in various forms such as daisy, spider, fuji, chusion, button and disbud. As for color, many chrysanthemums come in white, yellow, red, orange, pink and two or more colors. 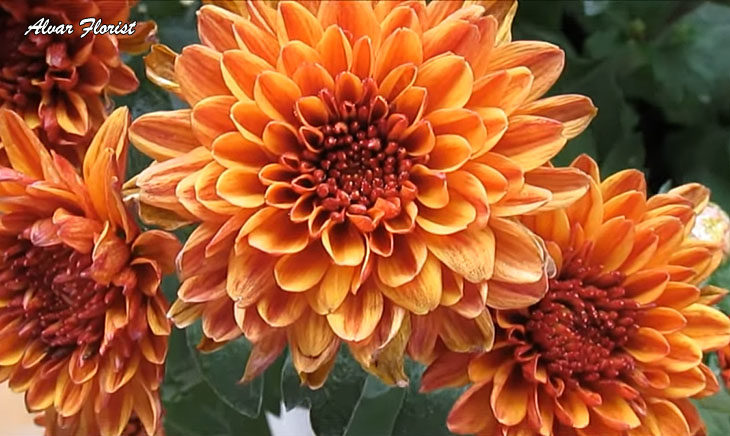 Chrysanthemum flowers are considered as a marker of the arrival of November. Chrysanthemum is one type of flower that can be arranged like a bonsai. Chrysanthemum flowers generally have a diameter of at least 1 cm and a maximum of up to 25 cm when flowering. In some European countries, chrysanthemums are usually used as flower arrangements to symbolize the atmosphere of mourning, such as at graves or during funeral ceremony.

Chrysanthemum flowers are very easy to care for, because these flowers can be grown indoors or outdoors. However, its maximum development can be seen if chrysanthemums are planted in fertile soil and are directly exposed to sunlight.

When do Mums Bloom

This type of flower will often be seen in flower shops from summer to fall. And this fact seems to be corroborated, because chrysanthemums are really selling well between August and November.

To be used as ornamental flowers, chrysanthemums are fairly long lasting compared to other types of flowers. This flower is able to maintain its beauty in a vase for up to 2 weeks.

How to Make Chrysanthemums Bloom Longer in Autumn?

Chrysanthemum flowers will only bloom for a certain period of time. But there are some key secrets to making them bloom big and beautiful a little longer during fall.

To get the longevity out of your chrysanthemum, look for chrysanthemums that are full of buds, or just starting to open. At the time of purchase. Large, beautiful plants in full bloom may look attractive in the store, but they are also more than halfway through their life cycle.

Buds of mums has just reached its peak, and will bloom for weeks. One of the best ways to preserve chrysanthemums for the entire fall is to buy them before they are at their peak. These chrysanthemums will bloom longer, flowering up to 45 days or more.

And that means they will not only give you a beautiful scenery this fall, they can then be replanted into the landscape to provide years of fall blooms.

Chrysanthemum thrives in full sun. But the sun and heat also speed up the flowering cycle of plants. Full sun puts the chrysanthemum into full bloom mode. In addition, the additional heat and pressure of the sun shortens the life of the flowers that appear as well.

Chrysanthemums stored in partial shade will retain their flowers longer. But kept in a partially shaded location, chrysanthemums stay in bloom for a longer period of time.

Partially shaded patios can be a perfect location to get the most out of mums bloom time.

The quickest way to shorten the blooming period of chrysanthemums is by inconsistent watering. Fall temperatures may be cooler, but dry air can quickly absorb moisture from potted plants.

Check your plant’s soil daily with your fingertips. If it is nearly dry, water it. The best method is to place your hose nozzle or watering can under the flower.

Too much water in flowers can damage flowers and shorten their blooming cycle. The quickest way to fail blooms for chrysanthemums is a lack of water. Infrequent watering will quickly lead to flowering and plant failure.

You can place the pot in a container with water underneath, allowing the water to seep up to the roots.

This technique keeps the plant watered for up to 5 days or more. This is to keep your chrysanthemum blooming longer and beautiful throughout the fall!

Do you interest to have chrysanthemum? Nowdays, many type of chrysanthemum seeds are easily found in the market. Caring this flower is also quite easy for those of you who are just starting the hobby of gardening.

Read Also: Natural Benefits of Chrysanthemum Tea that Should not be Missed