Terrariums will look beautiful with tiny plants arranged as if they are in a mini habitat enclosed in a jar. Orchid is one type of plant that makes a good terrarium material. Well, here we are going to share some best orchids for Terrarium in a jar.

Best Orchids for Terrarium in Jar

Here are some best Orchids for Terrarium in Jar:

Masdevallia orchid is a genus of the orchid family subtribe named Pleurothallidinae. These Masdevallia orchids love high humidity levels of 80% to 100%. In spite of the fact that they need bright light, they also prefer low light. Thus, it makes them the ideal species to put in a sealed terrarium. 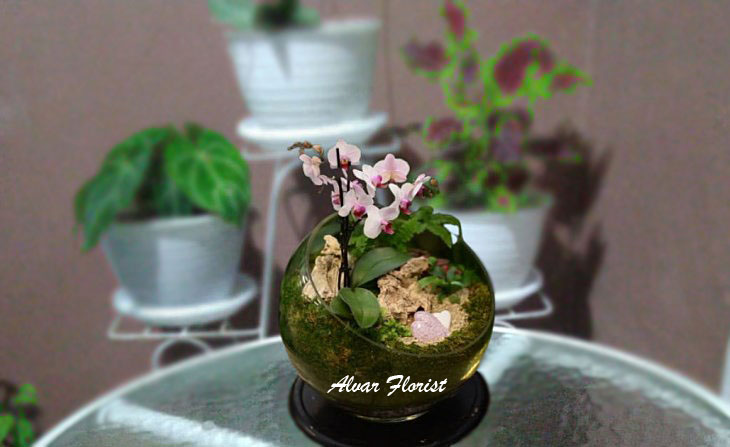 If you are making a terrarium with a Masdevallia orchid, you have to ensure that you do not put it in a spot which gets exposed to direct sunlight. Sun rays that directly hit your terrarium’s jar will be able to heat the air inside.

Some of the Masdevallia species that are commonly used for terrarium are:

You have to know that Dracula orchids love cold temperatures. So, you have to keep your terrarium away from exposure to direct sunlight. Aside from that, you do not let your Dracula orchid to temperatures over 68 degrees Fahrenheit or 20 degrees Celsius during the day. At night, you have to drop the room’s temperature to 58 degrees Fahrenheit or 14 degrees Celsius. To get the temperature to drop, you will need to direct a cool-air fan at the glass. Also, they prefer low-light and high-humidity conditions.

Angraecum species are epiphytes. Thus, they mostly grow on moss-covered tree trunks in shaded areas of Madagascar’s mountainous regions and other African rainforests. These Angraecum orchids thrive in warm, tropical temperatures in their natural habitat, under filtered light. Also, they need high humidity and moisture.

Some of the Angraecum species that are commonly used for terrarium are:

Lepanthes orchids are extremely small, so they are very perfect for terrariums. Also, the flowers are relatively tiny at 0.3 inches. Their leaves are enchanting with intricate patterns. This kind of orchid stays in bloom only for a short while. The colorful flowers show up just one at a time in succession, wherein if a flower withers, a new one is going to bloom.

Some of the Phalaenopsis species that are commonly used for terrarium are:

There are epiphytic Aerangis orchids that are very perfect for terrariums. In their natural habitat, these Aerangis orchids grow mostly on the moss and lichen-covered branches of trees and large shrubs. Most species do well in intermediate temperatures and a really humid environment, where moist air circulates the plant. Also, some species like warmer growing conditions. Aside from that, they also enjoy filtered and diffused light.

Some Aerangis species that are good for terrariums are: