Begonia is a plants that have tubers which commonly referred to as bulbs, beautiful flowers like roses in a variety of colors, and many other varieties. Usually begonia should be planted in early spring. Once they have sprouted, begonias will grow well easily in many areas with a wide variety of climates.

Begonia is a houseplant of rare beauty, capable of adding a cozy balcony and a shady corner of the garden. Varied in the form of bright inflorescences, many varieties and colors make begonias very popular to cultivate in the garden of home. 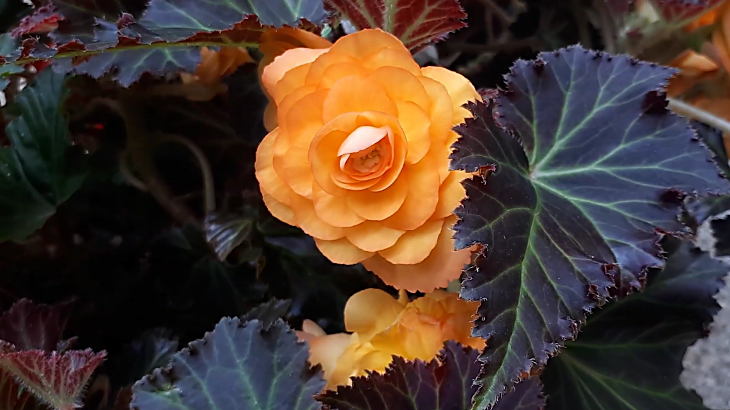 From June to the end of September it will flowering, then the bush needs a rest period. Since begonias are perennials, we need to provide the tubers with wintering in favorable conditions because the health of the plant and its ability to flowering further depends on this.

By digging it up before the killing frosts and storing its tubers during the coldest months of the year is safely way to overwinter this annual flower safely . So you can easily start to grow your lovely begonias the following spring in the garden of home.

To store the tubers for begonias, which are older than 2 years. Basement is one of the most popular ways to save on planting material at home. Just dry the tubers well and place in a wooden and covered with a preservative such dry soil mixture, peat, sawdust etc. And the temperature to store the begonias tuber in winter is similar to storage of tubers of houseplants. You can also place each tuber in a separate paper bag as an option, and place them in a dark and cool place such as in a cardboard box for storage. Garages are also great places for extended storage. 40–50°F is ideally temperature for storage of begonias tuber . This will allow the tubers to prevent rotting and get rid of pests.

Discard any leaves or flower that show significant symptoms of rot or withering or rot, periodically check in on the tubers is a must. So, the problem that occurs for one tuber will not affect them all as long as they are separated.

Begonias are mostly heat-loving plants and prepare them for winter is a must. Care begonias in autumn and how to prepare begonias for winter, it is necessary to knows first the types of begonias. Only a state of sleeping, they can survive the winter period. And flowers have prepared a state of dormancy, dropping leaves and stems since September.

In late winter or early spring its best time when you plan to regrow your begonias. Around June begonias should start blooming if you plant the tubers in February , while tubers that planted in March or April should bloom around July. The sprouts appear before planting is also important.

Here are some easy steps below:

For further information on how to grow and care for this beautiful begonia plant, you can check this out on How to care begonias in a pot outdoors easily.

In the spring, the plant grow again from its underground tubers that stay dormant during the winter. So you don’t need to worry if tuberous begonias are exposed to freezing temperatures for extended periods, the portions of the plants that are above the ground will die. In the spring new tubers will sprout after these begonias produce new tubers during the growing season then fall to the ground in autumn.