Snake plant and ZZ plant are two of the most popular plants to grow in your place. If you are considering choosing between these two and are looking for some differences, this post is worth reading. Please stay here until you read the last word.

The Difference between the Snake Plant and ZZ Plant

Actually, there is not much difference between the snake plant and ZZ plant. The difference is probably limited to the appearance. Instead of the differences, these two have more similarities instead. When it comes to the appearance, the snake plant can grow up to 4 feet tall but it is usually smaller in size (about 2 feet tall) when it is planted indoors. It has erected, fleshy, sharp leaves. Furthermore, the leaves are deep green with light gray green horizontal stripes. These leaves grow stiffly in a rosette from a thick rhizome. In the spring, it is possible for the snake plant to bloom. The bloom is small, fragrant, and greenish. Sometimes, orange berries also appear. Both flowers and fruit are rare cases, especially for indoor snake plants. 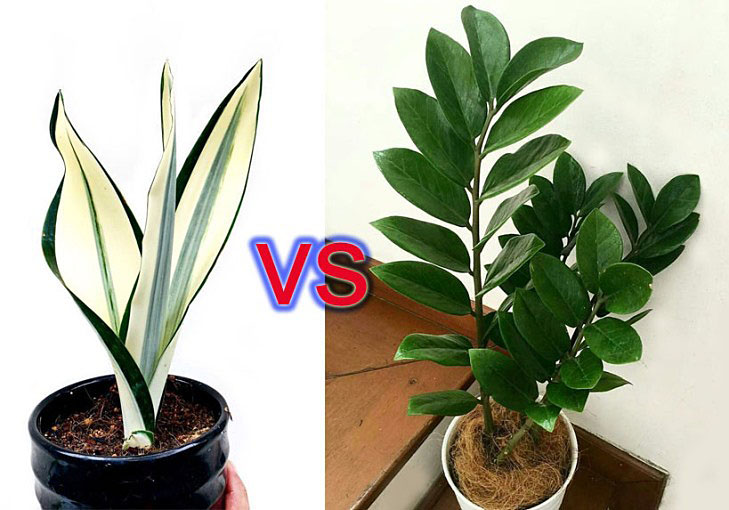 From a distance, the ZZ plant looks boring. You will realize how pretty it is when you get closer to it. This one has wide and dark green leaves. If they are left alone, they can grow quite tall and the leaves can be 40 to 60 cm long. As for the flesh, it is smooth and shiny.

Compared to the snake plant, the ZZ plant has a more unique look. This one has something like the root system. It has the roots like the ones owned by potatoes beneath the plants. These roots are known as rhizomes. There is water in these and it explains why the plant can overwater and it can survive in the drought. It is also the reason why it is one of the plants that can be placed indoors. Its dark green color is a sign that the light can be absorbed from even a minimum of sources, so it is perfect for indoor use.

The Similarities between the Snake Plant and ZZ Plant

Both the snake plant and the ZZ plant are popular for their air purifying properties. The snake plant is capable of turning the carbon dioxide gas into oxygen at night. It is one of the reasons why it is a perfect plant to be placed in the bedroom as it is expert at filtering the airflow. It has been proven that any variation of the snake plant has an ability to help remove the toxic air pollutants. Even though the contribution is not that big, it is still worth mentioning that it always does its best to absorb the pollutants that can cause cancer, including CO2, benzene, formaldehyde, xylene, and toluene. With its ability to filter harmful things, it is the perfect choice to be planted if you have airborne allergies.

Not only removing the hazardous things, the snake plant is also helpful to fight the allergies and sick building syndrome. If you have allergies, it might be a good idea to plant the snake plant to relieve your allergies as it is natural and is also not pricey.

Just like the snake plant, the ZZ plant has been studied and documented to have air purifying capabilities. According to a study dropped by the Department of Plant and Environment Science from the University of Copenhagen, a number of indoor plants have the ability to remove significant amounts of xylene, toluene, benzene and ethylbenzene from the air and the ZZ plant is included.

The two things called the snake plant and the ZZ plant are very low maintenance. While it is true that these two can survive in low light conditions, they love the bright and indirect light more than the direct one. The direct sunlight is harmful as it can make them burn and in worst cases, they will die.

When it comes to the water, you need to allow the soil to dry between watering. Two of them can be left without water as they can even survive drought. Keep in mind to not overwater them as their roots can be rotten.

Both the snake plant and the ZZ plant should be kept away from the reach of the children and pets as they contain poison. While the snake plant has saponins, there are calcium oxalate crystals in the ZZ plant. For those who have no idea about these substances, saponins are known as natural insecticides and fungicides. When your child or your pet consume it, the reactions include a few things such as vomiting or diarrhea. Besides, the juices of the plant can also irritate the skin. What about the calcium oxalate crystals? Just like the juices of the snake plant, it can irritate the skin. In the worst cases, it can cause serious things such as stomach pain. In case something that you do not want happens, please do not wait and seek a doctor or a vet immediately.

While the threat of these poisons is real, it is still recommended to plant these two and they are still safe to be planted. Once again, if you have there two in your place, please place them away from the children and the pets. To avoid getting irritated, you are suggested to always wash your hands right after getting in touch with the plant. In addition to that, it is also recommended to always wear a pair of gloves to reduce the contact with the plant.