Hibiscus on the beach, maritime hibiscus or sea hibiscus refers to one of the hibiscus species namely Hibiscus tiliaceus. This species presents a small to medium tree, native to coastal areas of Australia, the South Pacific and SouthEast Asia which is very well suited to coastal environments due to it can tolerate salinity and waterlogging.

As it can grow in a variety of coastal sands and soils, Hibiscus tiliaceus is a great plant for many situations, especially where other plants may not thrive in some circumstances. Its advantage is that this plant can be planted in poorly draining soils with bore water. 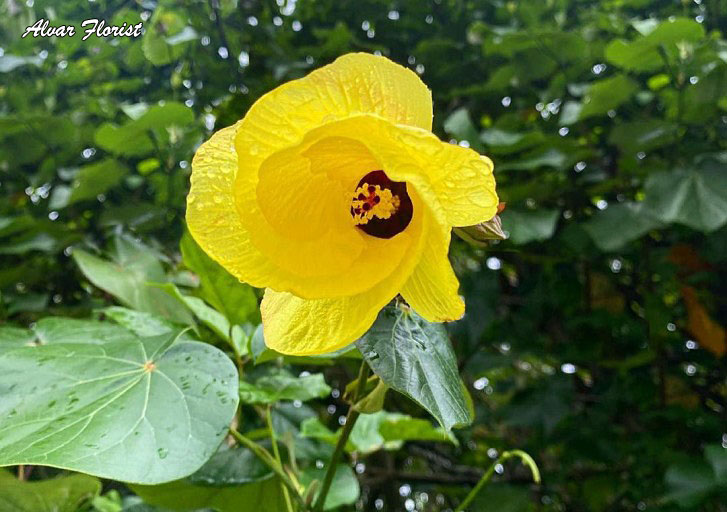 So, if you are curious about hibiscus tiliaceus, you definitely will get what you’re looking for: the information about this plant including identification, how to grow, maintaining tips and benefits. Let’s find out the whole information of Hibiscus tiliaceus in our post below!

Hibiscus tiliaceus or well-known as beach hibiscus is a species of flowering tree included in the mallow family. This plant is an evergreen, sprawling tree which typically reaches a height of 4 – 10 m (13 – 33 feet) with a trunk up to 15 cm (5.9 in) in diameter.

This plant often persists and spreads, especially in streambeds, moist gullies and any other wet areas after established. Moreover, it can grow in a variety of soils, including waterlogged soils, limestone and inhospitable brackish swamps. Well, this plant stands up well to ocean winds which can cause trees to fall over due to high winds.

You might have seen that hibiscus tiliaceus is highly variable in form, leaf and flower coloretc. And also some taxonomic varieties have been recognized. This species commonly used in coastal gardens in tropical and subtropical climates and can grow best close to the sea.

Generally hibiscus tiliaceus grows a short trunk with plenty of crooked which form an intertwined branches impenetrable thicket. They can also have a shrub-like form, with prostate branches where the canopy is much wider than the height of the tree, though erect forms with upright branches are also known.

Talking about its flowers, they are typical of the hibiscus genus, fragile, showy and short-lived which will fall the same day that they open. The flowers are borne in terminal, few-flowered cymes (3 – 6 flowers) or else solitary. The central staminal column of the flowers is covered in yellow anthers with a terminal, red, five-parted style. Additionally, the flowers will fade to pink prior to falling.

The leaves are simple, rather large (8 – 20 cm long by 6 – 15 cm across) which often presents wavy, discolorous, grayish-green and hairy below and bright green on the upper surface. You will also find a variant with bronze-reddish-green shoots and new leaves in Pacific islands.

Fruiting probably occurs throughout the year where the tree has a light brown, dry capsule, ovoid fruits, splitting into 5 segments and 10 cells of seeds at maturity. Furthermore, there are about 5 – 7 kidney-shaped seeds per cell which are rich brown to brown-black in color, hairy and roughened.

Hibiscus tiliaceus has a highly spreading, lateral root system, near-surface which is often composed of only a few main roots. Additionally, the bark is gray to light brown which becomes thick and rough with age.

Of course, a lot of forms which are found and not formally recognized as taxonomic subspecies or varieties. A rare upright form grown for its stem fiber which is known in Hawai’i called hauoheohe which was present before European contact with Hawai’i.

It cannot be denied that Hibiscus tiliaceus will thrive in coastal habitats, near brackish coastal swamps, along the inner margins of mangroves. This plant is generally naturalized in distributed forest areas, around villages, and grazing lands. It will favor environments with summer and uniform rainfall patterns.

Hibiscus tiliaceus will tolerate a broad range of soil types including various coastal and riverine soils. This plant is tolerant of shallow flooding and brackish conditions and this species will grow well over a broad pH range from 5 to 8.5. This species of hibiscus can grow in light to heavy textured soils such as sands, sandy clay, loams. It can also grow in soils with free or impeded drainage. It also tolerates acid to alkaline soils (pH 5.0 – 8.5).

The trees can grow best in full sun, after establishing, they can handle drought very well. It can also tolerate moderately high levels of shade (50 – 70%), however it will grow much more slowly if they are under shade and has characteristically larger leaves.

For propagation, hibiscus tiliaceus is easily performed both from seed and stem or branch cuttings. In this case, seeds can be germinated in trays filled with one part peat to three parts perlite or vermiculite.

Hibiscus tiliaceus have numerous benefits for humans. The leaves, roots and bark in times of famine have been eaten, just like vegetables. This plant is also reputed to be a good forage plant for bees.

Aside from being used as a vegetable, beach hibiscus also serve herbal medicines which can be obtained from its flowers, roots, and bark. Although low durability, the wood can also be used for utility timber but it  is used primarily for light and transient construction.

Hibiscus tiliaceus is also a popular bonsai in Taiwan and other countries in Asian. Its leaves can also be used for fermenting soy inyo tempeh in Indonesia. This plant is perfect as a windbreak, shade plant or screen in coastal areas because it can bear the full brunt of salt and exposure.